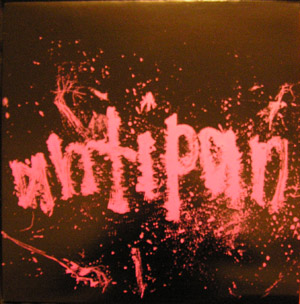 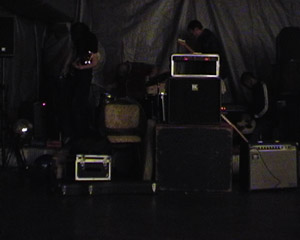 A single side of instrumental sturm und drang from Sydney quartet Antipan captured in felt thick lo-fidelity on bubblegum pink vinyl beautifully etched on the reverse side. Further, this one-sider plays from the inside out, another celebration of the physical loveliness of vinyl. Anthony Guerra, Matt Earle, Sumugan Sivanesan and Nick Dan ruck 'n' wreck the classic bass, drums, guitar combo into a thick, crunchy gale of righteous off-kilter riot-groove. The piece ends with a long and beautiful neon ribbon of feedback that carves a vivid sine-wave of blood-red intensity across a stage scene fading to black and bleeding carmine crimson around the after image of a group on fire.

It took us a few minutes to comprehend that this one-sided LP by this Sydney quartet was cut backwards, but once we deduced that, everything was ducky. Antipan are mostly instrumental, and thrash away amidst collapsing old buildings, using "standard" rock instruments to create small blizzards of feedbucked howl.

A one sided vinyl monster. Grinding splattery chaos. Super distorted rhythms beneath thick slabs of ultra distorted hiss and waves of crumbling crunch. That is the sound of Australia's Antipan, a fourpiece that traffics in spaced out aggressive free rock ambience. Or Neu! metal minimalism. Either way it's a gloriously unholy racket. Echoey guitars and streaks of feedback, all tangled up into a dense wall of krautrocky chaos, with buried vocals, and dense squalls of acid fried guitar malfunction and jagged melodic fragments. Those harsher moments are balanced by long stretches of distorted drone and glitchy throb, very reminiscent of their equally noisy countrymen Aufgehoben and Shit And Shine.
Pressed on SUPER thick bubblegum pink vinyl, one sided, the other side features an etching by Rizili from the Menstruation Sisters. Includes a dayglo pink insert, packaged in a hand screened, individually numbered pink on black sleeve.

Featuring members of xNoBBQx, Moseissly, Low Resistance Group & The White Petunias among numerous other things.This quartet whips up an almighty skronkfest which sounds like a bunch of hoods throwing standard rock instrumentation around the room willy nilly with a Tibetan monk popping in for a short time to deliver a chant & promptly getting out of there before any harm comes to his person. Playing from the centre to the edge you'll want to listen to this aural trepanning again & again til your neighbours' sanity snaps.

can one fit more love into one record? We think not.